The current reference datum of new maps in Namibia is the WGS84 geodetic datum.
Specifications are given in Government Gazette No. 6145 (7 October 2016):
Section 8.1.3: 'The World Geodetic System 1984 (WGS84) datum shall be used as the horizontal datum for all new digital orthoimagery and all vector data.'
Section 8.2.2 specifies the recommended projection as a modified Transverse Mercator.

Older topographical maps in Namibia, as well as the official cadastral system are based on the Schwarzeck Datum.
The Schwarzeck datum is based on the Bessel 1841 spheroid and uses the German Legal meter instead of the International meter (1 GLm = 1.0000135965 Im).
The projection on these older topographical maps is a Transverse Mercator projection with two-degree panels:

The projections for the different two-degree panels are included in the EPSG Geodetic Parameter Dataset, a collection of definitions of coordinate reference systems and coordinate transformations. EPSG projection files are available at EPSG.io:

To cope with some GIS or CAD programs that cannot handle the south-orientated projection the coordinates are sometimes just multiplied by (-1) and used with a normal north-oriented transverse mercator projection. For the same reason, instead of using the Germal Legal Meter as unit the normal international meter can be used with a scale factor of 1/GLM =0.9999864037.

Datum transformation parameters from Schwarzeck to WGS84 datum are only accurate to 30m countrywide.
Generally used parameters consist of only a translation/shift and no rotation and no scale factor.
Parameters are available from:

A free app to transform between different coordinate system in the WGS84 and the Schwarzeck datum is available here: 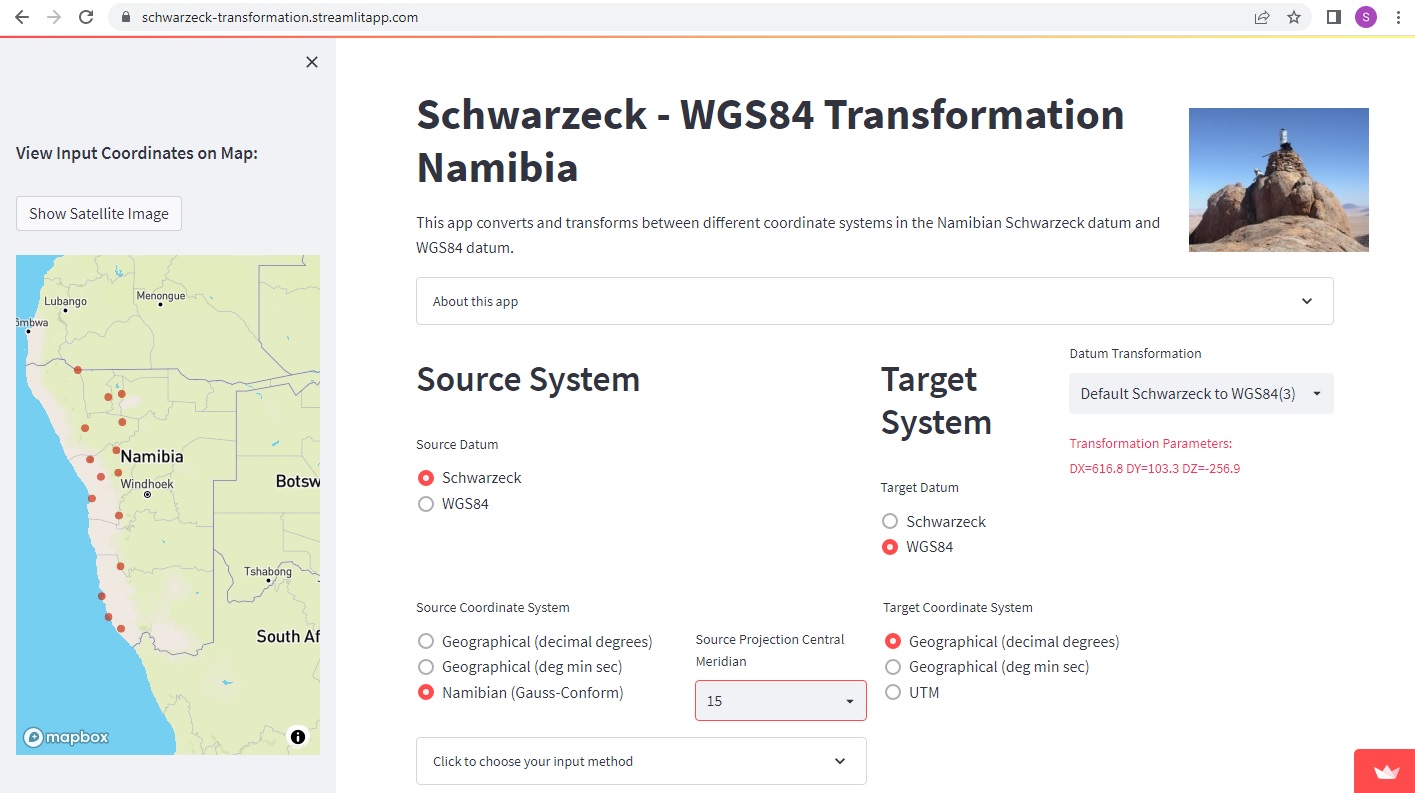 The Namibian Cadastral Survey Datum is the same as the older map system and is generally known as the Schwarzeck datum. It is based on the Bessel 1841 spheroid and uses the German Legal meter instead of the International meter (1 GLm = 1.0000135965 Im).
The projection is a south-orientated Transverse Mercator projection with two-degree panels as listed in the table above.
The effect of the GLM is very small for local areas (14mm over 1000m) and is usually taken into account by surveyors by including it into a scale factor. The effect is the largest for projected coordinates with large distances from the latitude of origin (22 S), with an effect of up to 7.5m in the north and 10m in the south of Namibia.

Prior to the official introduction of the above projection in the 1950's and 1960's, the longitude of origin was either 15 or 18 E. On most cadatral documents these are general referred to as preliminary system and are annotated as Lo.22/15 Prelim or Lo.22/18 Prelim. There are however numerous other cadastral survey system present in Namibia. These systems can typically be seen on some of the older cadastral farm diagrams, but also on some of the older general plans. Most of these are local systems that were established before the official Schwarzeck system covered the whole country. Some of these systems are the 'Base North (V) System' in northern Namibia, the 'Schwarzrand System' in South-western Namibia, the 'Kaiser-Wilhelm-Berg System' around Windhoek, as well as the 'Uitdraai System' east of Otjimbingwe.

In Windhoek the levelling datum differs and is called the ‘Normal Null’ (NN) levelling datum. The conversion from the Mean Sea Level (MSL) datum to the Normal Null datum is as follows:
MSL = NN - 3,475m, or
NN = MSL + 3,475m 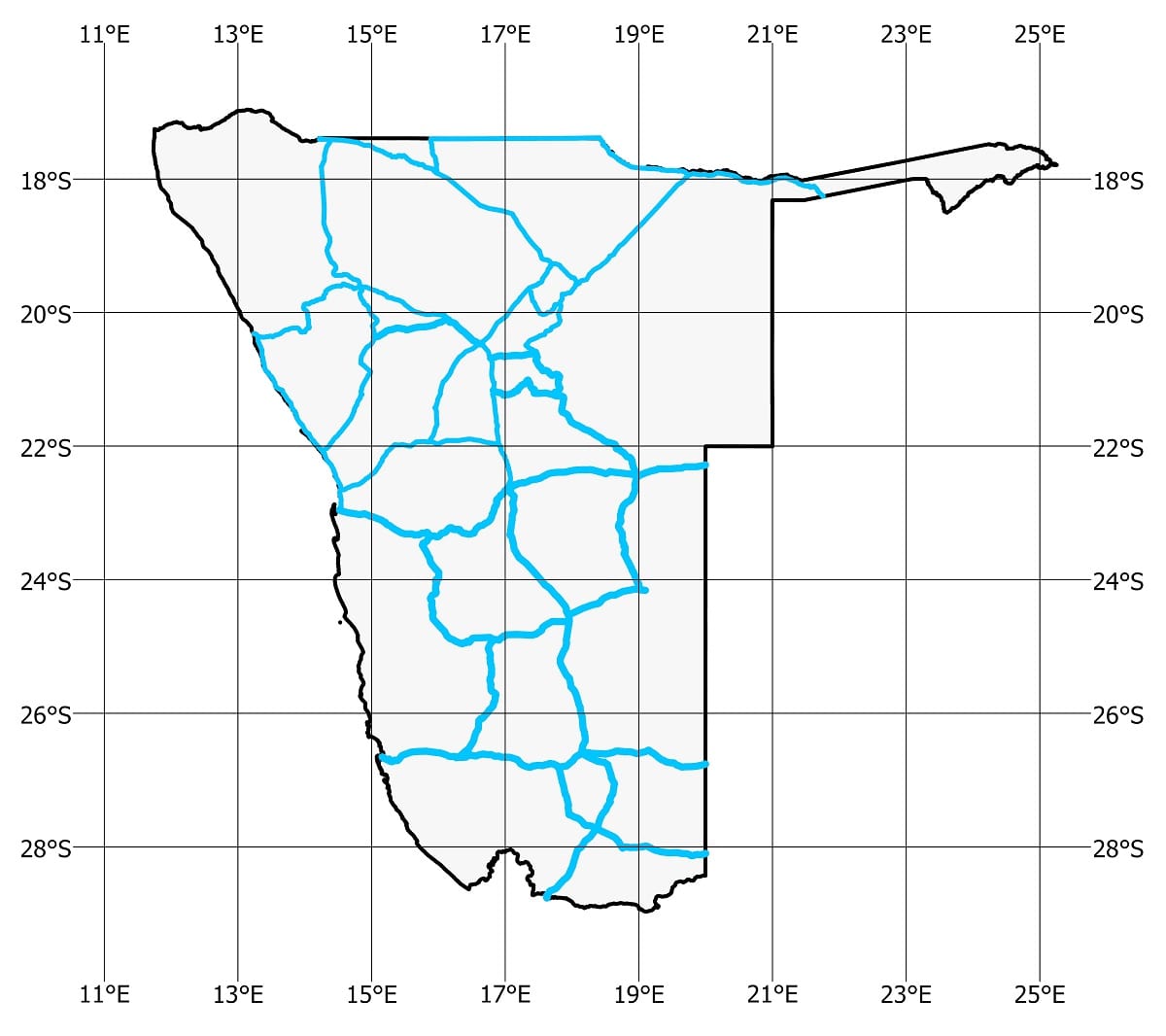 In Windhoek the levelling datum differs and is called the ‘Normal Null’ (NN) levelling datum. The conversion from the Mean Sea Level (MSL) datum to the Normal Null datum is as follows:
MSL = NN - 3,475m, or
NN = MSL + 3,475m